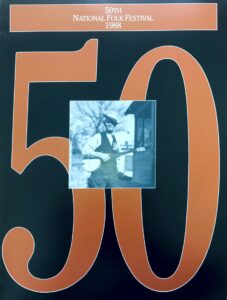 After a one-year stop in Lower Manhattan to celebrate the centennial of the Statue of Liberty, Lowell, Massachusetts, became the National Folk Festival host city from 1987-1989, igniting what remains one of the NCTA’s longest running and most successful partnerships. The nation’s oldest industrial city was just emerging from a long period of economic decline, thanks in part to a unique partnership between federal, state, municipal, and private organizations. With the establishment of the Lowell National Historical Park (LNHP) in 1978, the city embraced its industrial history with renewed energy and enthusiasm. It was during this early formative period that the NCTA’s then-executive director Joe Wilson first visited the park. Lowell’s Festival Regatta Committee was another important player in these early revitalization efforts, having produced multicultural festivals on the riverfront. Together, LNHP and the Regatta Committee, along with the NCTA and the Historic Preservation Commission, agreed that the city’s legacy as an old mill city and its diverse cultures and immigrant communities—both old and new—made Lowell an ideal site for the National Folk Festival and its first legacy festival.

Located at the confluence of the Merrimack and Concord rivers, 30 miles northwest of Boston, Lowell was previously known as Wamesit, a hub of Native American trade and the capital of the surrounding area inhabited by groups known broadly as the Pennacook Confederacy. Founded as a textile manufacturing town, by the 1850s it had become the nation’s industrial capital, attracting American, Irish, Greek, Portuguese, and Polish workers, among others. Lowell’s prosperity continued until the 1920s, when many of its manufacturing companies relocated. After further decline during the Great Depression, Lowell experienced temporary relief during World War II, but once its last textile plants closed, the city was plunged into a decades-long economic slump. Things began to look up in the early 1980s; new industries and waves of immigrants arrived from Southeast Asia, creating new opportunities and swelling Lowell’s number of distinct cultural communities to almost 60. Dovetailing with other energies in the city, these changes set Lowell’s remarkable late-20th century recovery in motion.

Held in Lowell’s newly restored former mill district along the Merrimack River, the 49th, 50th, and 51st National Folk Festivals were an immediate success, with crowds numbering over 150,000 and expanding each subsequent year. In 1988, the National celebrated its 50th anniversary in healthier shape than it had ever been. An unprecedented celebration of multiculturalism in the heart of a city noted for its diversity, with the largest audience in its history, the event marked a pinnacle of achievement for the National. Critically, Lowell provided the opportunity for the NCTA to fully implement the National’s newly reinvented structure as a three-year event, presented in partnership with local organizations committed to launching their own sustainable festivals following the National’s departure. Though the idea first hatched during the event’s 1983-1985 tenure at Cuyahoga Valley National Recreation Area, the 49th-51st (1987-1989) Nationals in Lowell formalized the model for all of the successful partnerships to follow. Ever since, the National has continued to travel every three years: a moveable feast, engaging with and nourishing its host communities.

Local organizers launched the Lowell Folk Festival in 1990, with the NCTA continuing to assemble its artistic program and provide production and logistical support. The event has grown to become one of the largest and most respected of NCTA’s legacy festivals, drawing over 150,000 people and generating $7 million in economic impact. It features five stages, a folk craft area, foodways and craft demonstrations, a family area, and regional and global cuisines from local community organizations. Now in its third decade, the Lowell Folk Festival has undergone many changes and seen a new generation of staff, performers, and audiences. What has remained constant has been the support of the community to bring people of all walks of life together and introduce them to all that Lowell has to offer.

Explore the programs from the 49th, 50th, and 51st National Folk Festivals by clicking on the thumbnails below. 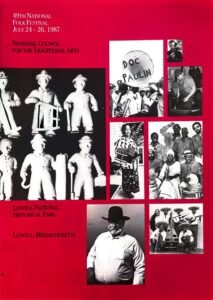 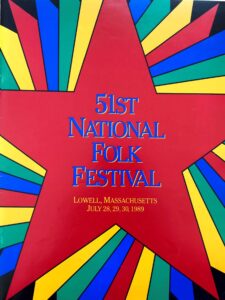 “It’s all about sweat, energy, and cumbia.”

@yodelking59425 is a cowboy and a traditional coun

We are enjoying thrilling and touching performance

Enjoy some photos from Friday night of the @lowell

As our staff, production crew, and amazing communi

We are deeply saddened by the passing of renowned

Korea by way of Chicago will unfold in Richmond th

Check it out! Salisbury’s own @lcskateshop is br

The schedule for the 81st @nffmaryland has been an

Central to the musical traditions of New Orleans a

When people “are absorbed into a performance, th

The Lowell Folk Festival schedule is available at

Last night was a beautiful return of the @montanaf

What a night at @PetroglyphNPS! Wednesday evening,

In the decade since they formed, @SidelineBluegras