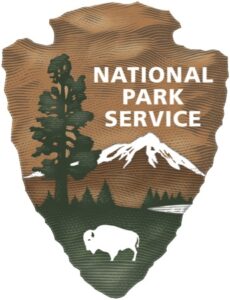 Since entering into a cooperative agreement with the National Park Service (NPS) in 1970, the NCTA has offered a wide range of programmatic assistance to over 50 NPS-administered sites in 36 states and U.S. territories. Our work has included planning new parks, conducting ethnographic studies, organizing crafts and museum exhibits, developing traditional music presentations, training park personnel in cultural presentation techniques, and assisting local non-profit groups with organizing cultural events in national parks. Below is a list of NPS sites with which the NCTA is currently collaborating, and a brief description of this work. Be sure to visit our YouTube channel for a playlist featuring the NCTA’s recent NPS projects.

National Park Service sites with which the NCTA currently partners:

Blue Ridge Parkway is a 469-mile stretch of road winding through the culturally rich Appalachian Mountains of Virginia and North Carolina. It is home to the $14-million Blue Ridge Music Center (BRMC), a site dedicated to preserving and celebrating the region’s traditional music and musicians.The BRMC houses the Roots of American Music interactive museum, which traces the origins of Appalachian music and illuminates its seminal role in shaping American popular music.

Florissant Fossil Beds National Monument is located just outside of Colorado Springs, Colorado, and is home to one of the world’s richest and most diverse fossil deposits. With fossils ranging from massive petrified Sequoia trees to tiny fossils of insects and plants, the Monument provides opportunities to explore paleontology and life 34 million years ago. The NCTA partners with Florissant Fossil Beds on interpretive programs that combine cultural expression and geological exploration.

Gullah Geechee Cultural Heritage Corridor Commission/National Heritage Area is home to one of the country’s most distinctive and threatened cultures. The Gullah Geechee people of the Low Country and Sea Islands of South Carolina, Georgia, Florida, and North Carolina are direct descendants of Africans who were brought to the United States and enslaved for generations, and whose relative isolation resulted in strong West African cultural retentions. The NCTA’s work with the Commission includes initiatives to identify, catalogue, digitize, and copy Gullah Geechee cultural materials, and expand access to their use by the Gullah Geechee community.

Harriet Tubman Underground Railroad National Historical Park is a relatively new NPS site located in Maryland that is named for and preserves the landscapes that Harriet Tubman, the Underground Railroad’s best-known conductor, used to carry enslaved people to freedom. With nearby Salisbury, Maryland, hosting the National Folk Festival since 2018, the NCTA has assisted the Park with community outreach through intimate, free, outdoor concerts at the Park’s Visitors Center as well as interactive, educational demonstrations in the National Folk Festival’s Family Area, furthering themes related to the Underground Railroad, Tubman’s life, and the journey to freedom.

New Orleans Jazz National Historical Park, closely aligned with Jean Lafitte National Historical Park and Preserve, aims “to serve the nation as a global leader in the promulgation of New Orleans jazz by enhancing and instilling a public appreciation and understanding of the origins, early history, development and progression of this uniquely American music art form.” Located in the French Quarter of New Orleans, the Park provides many visitors an introduction to the city’s jazz tradition.

Lowell National Historical Park, among the NCTA’s oldest Park partners, is an urban park in Lowell, Massachusetts, that interprets the American Industrial Revolution and the immigrant communities that fueled it. The NCTA has worked with the Park since Lowell first hosted the National Folk Festival in 1987. It has supported its successor event, the Lowell Folk Festival—among New England’s most important cultural events—since 1990.

Richmond National Battlefield Park encompasses Civil War battlefield sites and visitor centers in Richmond, Virginia, and surrounding counties. Partnering since 2005 with the Park, the City of Richmond, Venture Richmond, the Virginia Folklife Program at Virginia Humanities, and the Children’s Museum, among other entities, the NCTA co-produces the Richmond Folk Festival, considered the “jewel in the crown” of the city’s cultural calendar.

San Juan National Historic Site on the island of Puerto Rico features Spanish colonial structures including Castillo San Felipe del Morro, Castillo San Cristóbal, the San Juan Gate, and Fort San Juan de la Cruz. Its mission is to preserve natural and cultural treasures of Puerto Rico for the enjoyment of this and future generations. The NCTA began assisting the Park with interpretive cultural programming in 2019.

Recent highlights from NCTA’s work with the National Park Service:

Complete list of National Park Service sites with which the NCTA has worked:

If you wish to learn more about how to involve a National Park unit in the work of NCTA, please contact parks@ncta-usa.org.

The last full weekend in July is always the @Lowel

We are pleased to share today's announcement of th

Raised in the Portuguese American community of Per

Today at 5pm EST, tune in to @myVPM for a rebroadc